David is a talented photographer. He is also a famous Jazz musician. He is living together with Thierry Lachaux in a big apartment on the shores of

Ramon Gandarian, yes, the famous Ramón, is now also a friend of Thierry, as he found out were David lives now. He is already of a certain age, a famous historian, Pulitzer Price Winner and Literature Nobel price winner. Today it's hot in 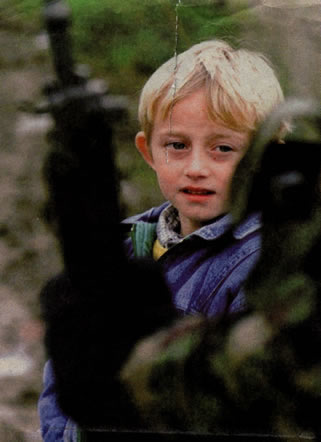 Just besides there is a picture which David made of him when he was still a child. Then, David had to earn money as reporter of the LA Evening star. He had volunteered for the Vietnamese war. Alec, his name was then Max, is an illegitimate son of a high rank American Officer (Counter Admiral Max Smith) a son of an immigrated Swiss Banker of the Name of Hans Schmidt. This admiral stayed in as head of the American forces. He did not really fight, that doesn’t befit for son's of Swiss bank managers. He stayed for some time in like many other Americans, picked up “Susie” a Cambodian girl and told her how he loved her and wanted to marry her. If that reminds you of Verdi’s “Madama Butterfly”, you are certainly not mislead. But what happened at the beginning of the last century might also happen in the so called modern times, and don't think that the sons  of the oldest democracy of the World are more integer than was Pinkerton! I have been told that there are many former Mafia bosses which emigrated from and have established themselves perfectly in this Land of the setting sun. This fine American hero, the counter admiral Max Smith, left Susie and didn't come back. The boy she bore was too much like his father, to be accepted in his mother's family. His mother was expelled from the family, fled to to avoid being killed by some family member. She always thought her beloved Max would look for her. But Max was now well back in again and didn't think any longer of his Cambodian sweetheart. And though the poor mother of Max was now considered as a Vietnamese whore, she had to earn her living and was only accepted at the American camps, where she served American soldiers needing to make love far from their cosy homes. They had made an Inferno of Vietnam and did not like this. All the time she thought her beloved Max would come back. He had certainly been killed in the barbarian country of the West, she thought. Life was so terrible in

David had never been able to withstand the terrible shock in , his soul was sick for ever. He lost all hope and love of mankind. As soon as possible he returned to , to his studio, but he had lost all his drive, didn’t have any phantasie to work sat around in his studio, drinking, smoking shit, always high. Of course he had not been able to produce any good photography after his return from . The picture he had taken of the poor hanged woman now hangs on the walls of the Ramón Gandarian museum in

As everybody knows, Ramón and David lived some months in their comfortable villa, but David couldn't stand it, living with Ramón in this posh touristic town, surrounded by misery, somewhere on the shore of the West coast of a poor country, rich of the black gold, oil, producing dirty money which flows .... not into the pockets of the poor in Mexico, but serves some rich yankee adventurers in the Middle West to reign over the richest country of the world, to produce arms which are used to kill the poor in Afghanistan and Irak and again enrich the same, already rich yankees of the Middle West. He quarrelled with Ramon and the pictures of their somehow crude fight, Ramón having been stripped off all his clothes and thrashed by David, were published everywhere as it happened the day before Ramón got his Nobel Price of Literature. David flew to LA. He came by chance upon a blond boy who was marching on the middle of the pavement, hand- and feet cuffed, surrounded by two grim looking, enormous policemen handling knifes and guns as if they were fighting for live against a horde of giants. David couldn't help picturing this poor boy, looking at him with seeking eyes. He felt horrible, because he could do nothing for his salvation. And at home, he was even more miserable. The picture of Love, he had still with him, felt out of his purse, and he realized that this poor, miserable, shackled boy was in fact the son of the woman having hanged hold by a rope biting into her ankles, her whipped, bloody body exposed to the birds of prey. After having taken this picture, David had always looked out for Love, but he never managed to see him again, save for this last time. But the nice blond boy was no longer around, probably secluded somewhere in a prison cell deep under the earth and David found no possibility to help him flee. Only Ramón could have had to money and the relations to buy his flight, Ramón was very clever and as a former agent of the FBI, had also the necessary links. But David didn’t have the gut to contact Ramón again, he thought that Ramón was so upset about him because of the press pictures. Finally he gave up, left this country he hated so much, went to and met Thierry before the most touristic Gothic cathedral of ,

"It happens in the area of King Kallisthenes the great, when the Hyksos live in Achaia, before emigrating to . Alekis, the young crown prince, a dark-haired, nice and dreamy boy, has been murdered. Nobody understands this act of brutality because Alekis is such a peaceful creature.  Nobody can understand why Alekis could have had enemies. In the morning of the day he should have been married to princess Chrisethemas, short Chris, the oldest princess of the befriended neighbor state of Nauplia, he is found dead with a mutilated body lying in the nuptial chamber where he had no right to access before his wedding. Never would he have accessed by his own free will to this place, not peaceful prince Alekis! It looks as if he was raped and had to die slowly from the wounds inflicted by his perpetrators in his back. There are rumors of the murderers having been of the princess's family. There are even rumours that the body found is not Alekis, but the high priest's son Nikos, and Alekis is still hidding having perpetuated the awful crime out of a fit of jealousy. In fact, only the king, that is Kallisthenes, nick named Kallis, has a key to the nuptial chamber. It's a very dangerous political theme as today he expects a visit of an emissary of the family of the bride. King Kallisthenes the Great, Kallis, very much relies on Nauplia as a befriended kingdom. It has always been an important ally. The throne of King Kallisthenes is imperiled. After this murder the folk is very much upset. They expect of  King Kallisthenes the Great to declare war to the former allies."

More about how King Kallisthenes the Great found out who murdered Alekis, and Ramon Gandarian's dreams will shortly be published.

Read "The war between brothers"

Read "In front of Wilhusa"